served his apprenticeship as a carpenter & joiner, he went on to become a self taught cabinet maker. His last job was working for the Leicester Museum Services, doing cabinet work, gallery's etc. This is where he saw his first Norris and couldn't believe the quality. Adjustable Norris's are the most sought after planes in this country, without doubt.

Bill started making planes for himself in the 1970's, these were always made out of timber. In 1983 he made his first metal plane after seeing a set of plans in the Woodworker magazine. In 1987 Bill left full time employment to concentrate on plane making at home. We estimate he has made about 1000 planes. He is now 81 years old and is still making a few planes in the summer months. Bill is self taught and never had any metal work tuition, it's all been learnt by trial and error. His speciality is copying rare mitre planes and making miniature mitre planes out of the brass backs of old tenon saw's. Bill likes nothing better than to find a rusty old disgarded tenon saw with a beautiful makers mark on the brass, which he retains when making a plane adding his name somewhere. 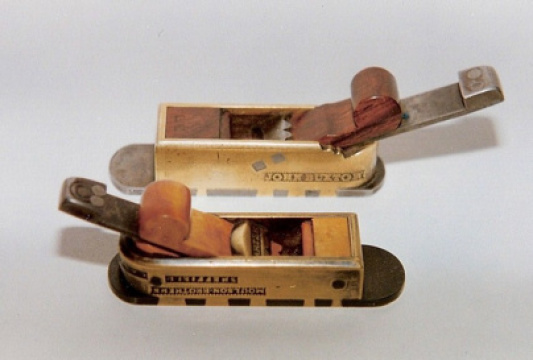 If you wish to read more about Bill go to Handplane Cenral Interviews. There is a 13 page interview with Bill, also some picture of his planes, the only thing they got wrong was his age.

About 20 years ago a friend of mine, Peter Bishop brought this plane for me to purchase, it was in a terrible state. The bronze casting was dented in on the front. A previous user had worn the iron right down past the wedge, so had cut the wedge off in order to set the plane. The front infill was beyond repair. I decided to infill it with boxwood, I only had one piece big enough to do it, with a little left over. On removing the front infill I discovered 2 bronze pillars cast into the body running top to bottom just below the top surface of the infill. Then at the bottom of the plane, cast again into the body, was a well. Fortunately it was a midsummer's day and the light was good. By tea time I had made the wedge and had partly shaped the front infill and without giving it to much thought, I had cut the front infill around the pillars and shaped it to fit into the well. Sarah called me up for tea and just before I went, I started to cramp the unfinished front infill into the plane, using the soft jaws of my vice. After tea, the front infill was half in and half out and I could not budge it, I'm now really upset, I chiseled a 3/8" gap running front to back of the front infill and I still couldn't get the 2 halves out. I had to nibble away until I got the rest of the wood out. Of the original piece of boxwood that I started with, I just had enough to make another front infill. I was so upset with the mistake I had made, I finished the new front infill and fitted it before I went to bed. It was now about 11 o'clock. Had I not finished it I would have been unable to sleep.

At a later date I coloured the boxwood with Nitric acid, to make it look more in keeping with the age of the plane. I said I would never sell the plane, but I did. It went to Ireland. About 10 years later I had the chance to buy it back, I said to Sarah, I will never sell the plane again. But I did, this time it went to America. Some years later I had the chance to buy it back, I could not believe my luck. I am now all on edge waiting for it to return. When I took it out of the parcel the nitric acid over all these years had coloured it a very dark brown, it no longer looked like boxwood. I decided to scrape it, this turned out to be a very tricky job, I could not take any off the bottom or sides of the wedge as it would make it loose and wouldn't fit in the right place. The front infill proved tricky as it had to be scraped in situ, it took the best part of a day. It was still to dark, the next day I did it again and it still was to dark, guess what, the naxt day I did it again, this time Sarah & I were both happy with the result. When I originally infilled the plane I stamped my name on the front infill, on each of the 3 days that I scraped it, I erased my name and had to stamp it again. In total my name has appeared on this plane 4 times, but no one would ever know unless I told them. 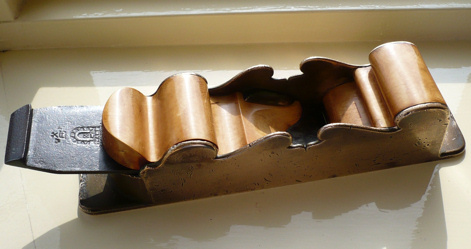 When I got up a week last Sunday, Sarah told me you will never believe a picture of a plane we have just received from Canada, somebody I don't know had emailed me telling me there was a very unusual plane for sale on Jim Bodes for sale list, very similar to one I have already have. I couldn't believe my eyes, it is a very heavy cast bronze mitre plane, nearly 3" wide with ebony infill and the iron is marked Gates, Warranted, Cast Steel. I don't know who Gates was. The bottom of the wedge has a very nice cupid bow which leaves me to believe it is British. You can just see on the underneath side of the iron, there is a ink marked price of 1/9, this was probably put on when the iron was sold and it has stayed there all this time because of a dip in the metal, which is also right in the position where you would rub every time you would sharpen it. The iron was a terrible shape when I got it, the last 2" near the cutting end was bent up and of course you can't straighten this bit easily. I worked on the iron for the best part of 2 days and boy was it worth it as it now works like a Rolls Royce. Many thanks to the man who informed me. 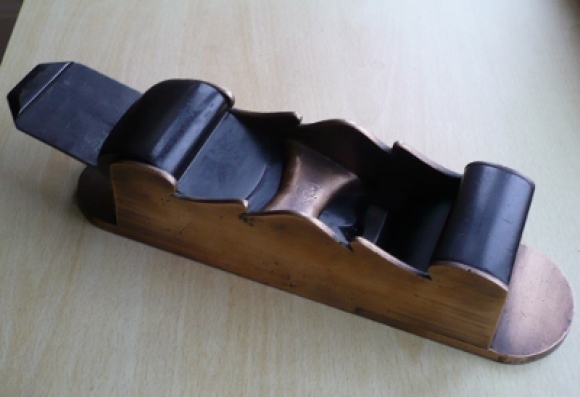 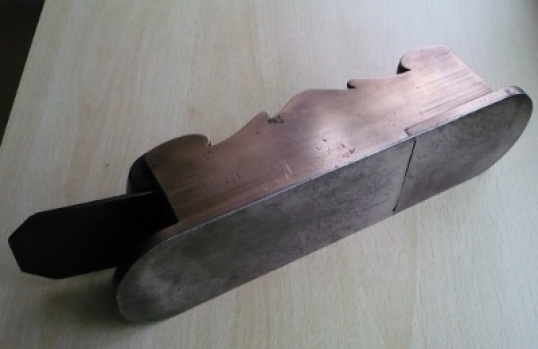 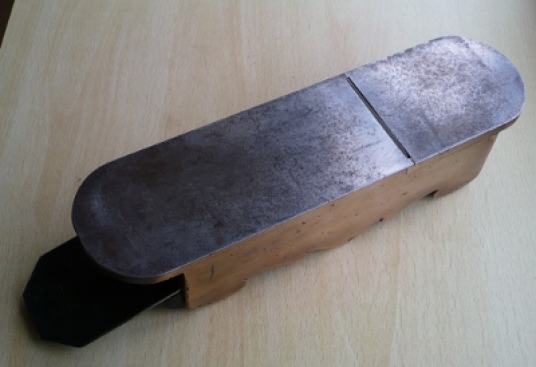 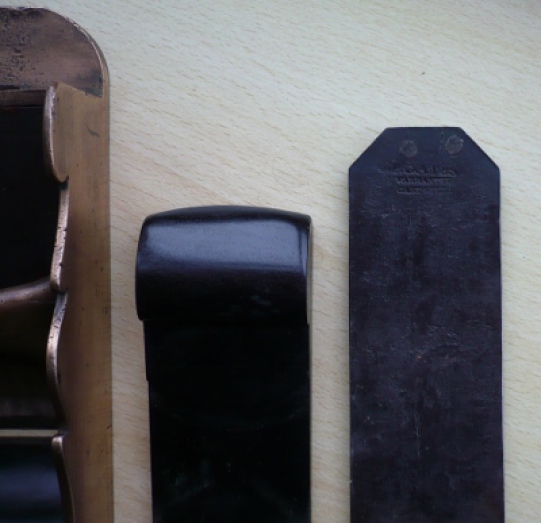 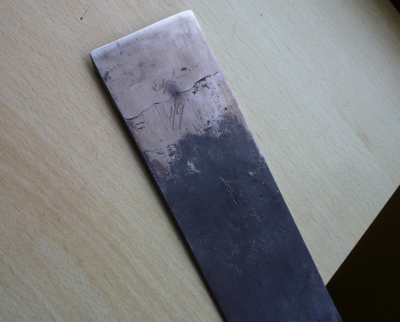 This picture below of the ebony infill plane shows how the front half of the sole exactly resembles the boxwood plane lower down with the similar body shape. 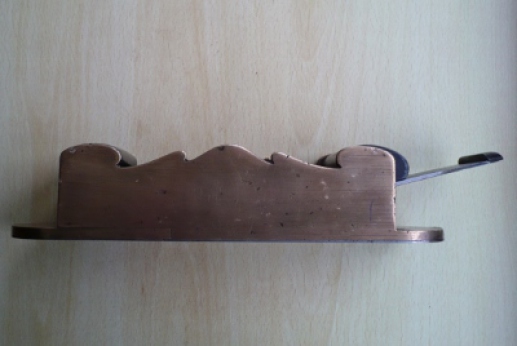 I have now lightly cleaned it erasing any tiny faults, to my liking. It is a great plane.

I want to talk about the bronze plane with the ebony infill, I have placed it along side my existing plane for you to compare. I believe the boxwood one is not by the same maker, it is much bigger, cast in a different way and I would think earlier.

I would like to show you a plane I had earlier which had a very similar casting to the ebony one. The dimensions are very similar and the way they have attached the front part of the sole looks to be identical. I assume the ebony one will have 4 screws attaching the front sole piece as the plane below. I would need a xray to prove this. 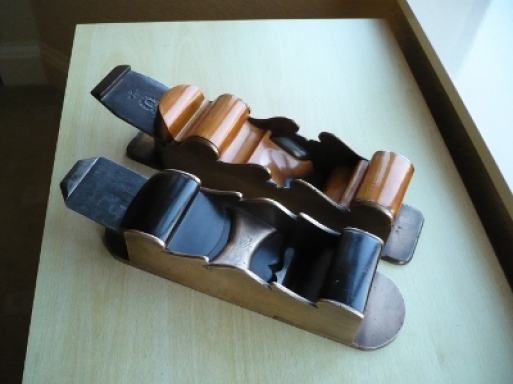 The casting as found before I put the cupid bow in the middle. 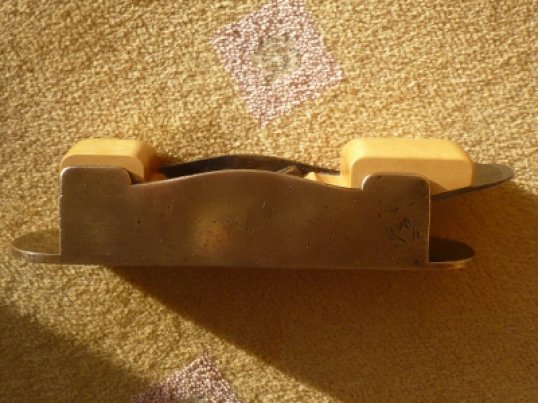 This shows how the front half of the sole matches the one above it with ebony infill. 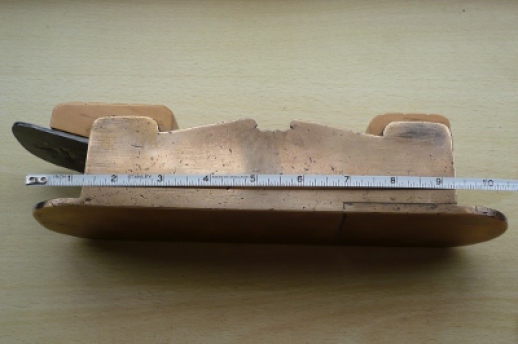 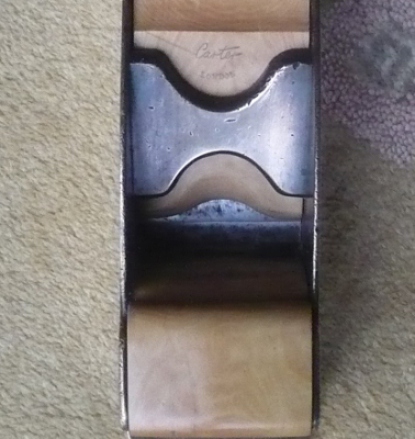 I have just bought this really old carvers mallet, thought to be early 1700's or before. When I first got it I displayed it on my table at a  David Stanley sale and we all thought it was made of oak, most people thought it was burr oak, I have now very lightly cleaned it and I am 100% sure it is rosewood, this is one of my favourite finds and I have never seen anything like it.

I am hoping it belonged to Grinling Gibbons, ( wishfull thinking). 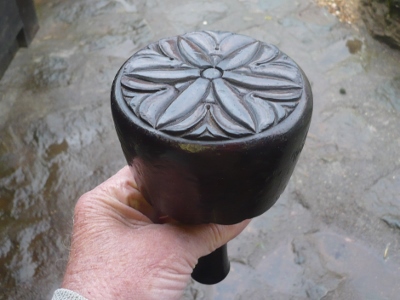 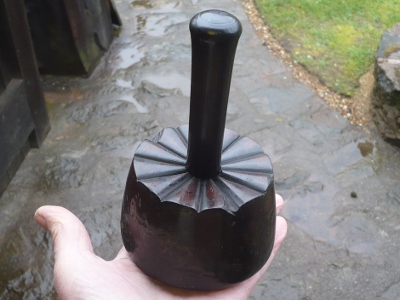 This tool was used for marking "Standing Trees" that have just been purchased. The owner of the axe would take a cut out of the bark,"a blaze" and strike his mark. 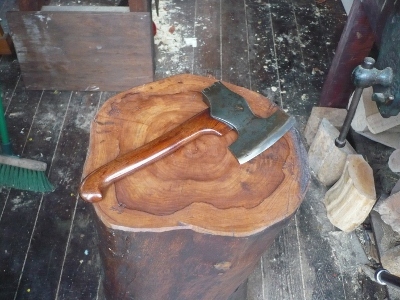 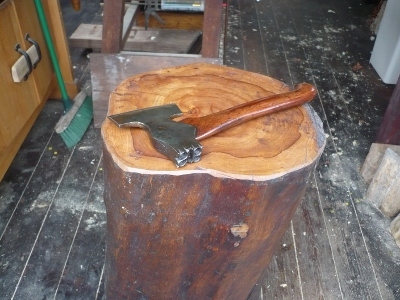 You can see a close up of the mark in the photo below, S&B in this instance, these initials coincide with our names, Sarah & Billy.

According to the Dictionary of Tools, under hammer "marking", these tools were very rare and when not in use, were kept under lock and key. 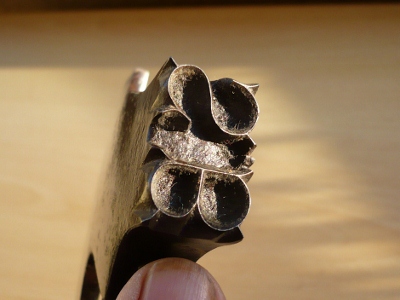 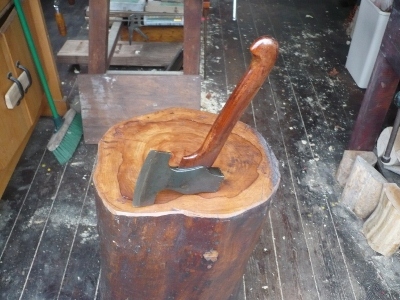 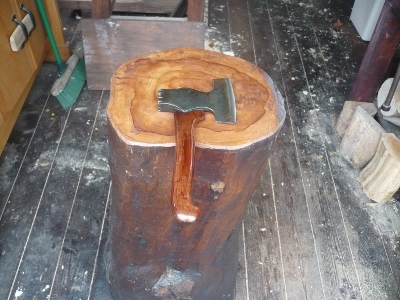 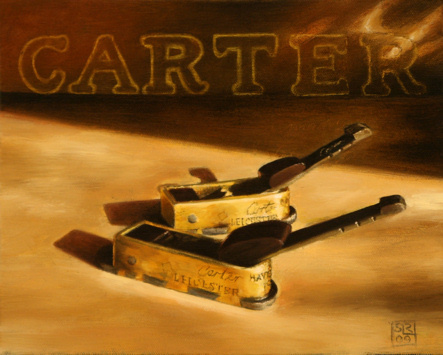 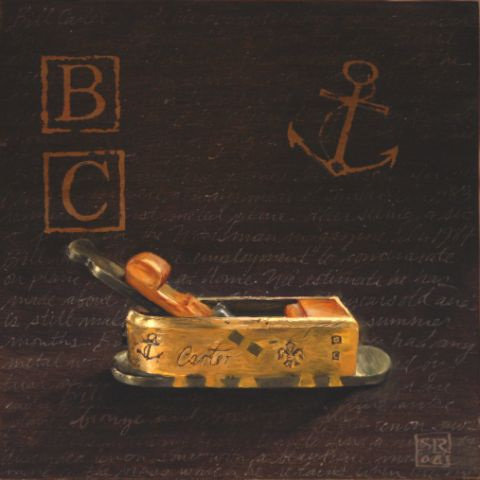 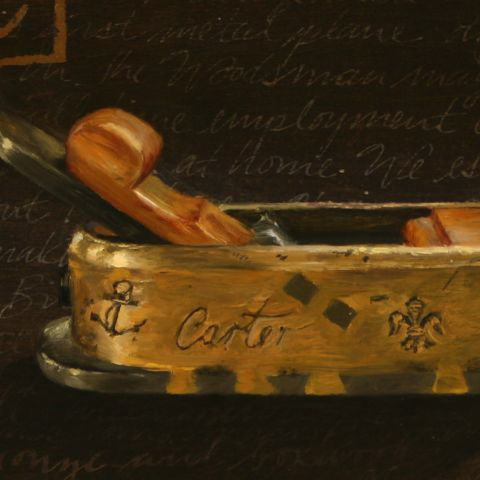 Is this not the most beautiful smoother in the world, I think so. I could write a book about this plane but for now I will keep it brief. 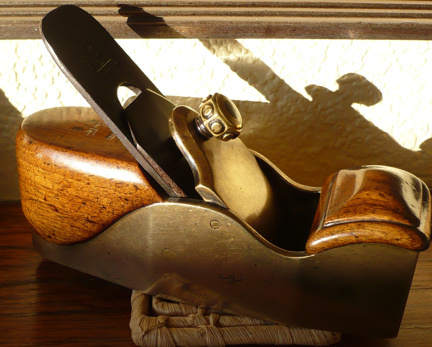 This is how the plane is today, complete with a round topped period iron. The body is Bronze as is the lever cap. The lever cap screw has a steel thread and an ornate Brass top to it. The Walnut infill is over, over stuffed, I can't recollect seeing an over, over stuffed plane in the past, but I probably have. Someone once said, the infill appeared to be poured in, flowing over the sides, the plane is very heavy. Although this plane is in wonderful condition, I think it is early and has had a lot of use. I say this because on the front infill towards the mouth there is significant build up of swarf and paint and where a previous owners thumb has rubbed giving a lovely lustre.

I first saw this plane, over 20 years ago in a collection and yearned for it ever since. About 12 years ago I bought it and for the next 8 years or so, I thought it was unique. Then out of the blue I had a phone call from Nigel Lampert in Australia, stating Bristol Design had a near identical plane except that it had a rear handle. I did not do anything about it. One year later Nigel phoned again telling me the plane was still for sale for a small amount, because of the broken condition of the handle and a few more blemishes. He insisted I have a look, so I sent for a catalogue. He listed a lot number in the catalogue which I duly found and showed Sarah stating, "Look it is nothing like mine". Whilst browsing through the calalogue, although the pictures were poor, sure enough I found the plane, Nigel had given me the wrong number. 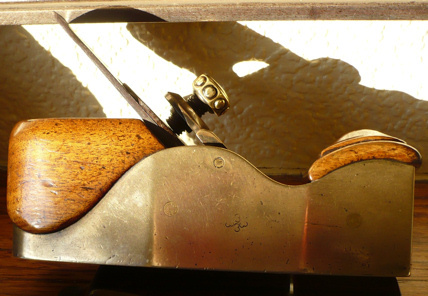 (Note the distinctive vertical lines in both sides of the plane. I like this feature.) 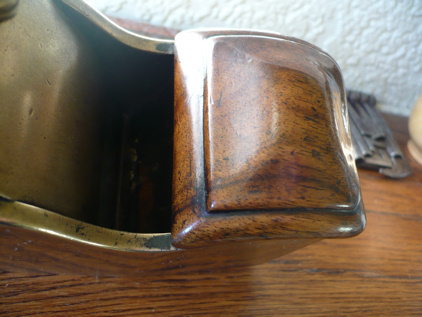 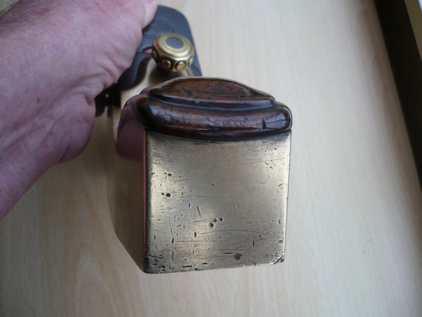 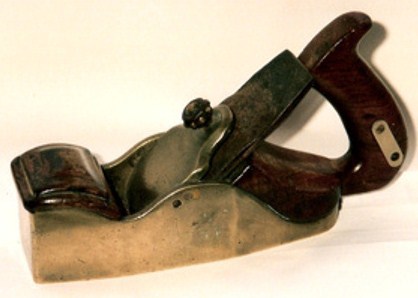 I bought the plane pictured above, thought someone had reshaped the rear infill and added a handle. The handle was beyond repair so I cut it off, (see picture below) and left it at that. At a later date, carefully looking at what was left of the handle inserted into the rear infill. I had second thoughts and now believe that this plane had a handle from the beginning. I now decided to make a new handle, which I neatly let into the rear infill withoit disturbing the piece you see in the picture below. Unfortunately I no longer have a picture of the finished plane or the plane itself.

I've just remembered, when I bought the second plane, the front Walnut infill's on both planes were cut out of the same piece of wood, the annual rings matched up perfectly. One last point I have just remembered, I have seen somewhere a third plane, but again it was in very poor condition. 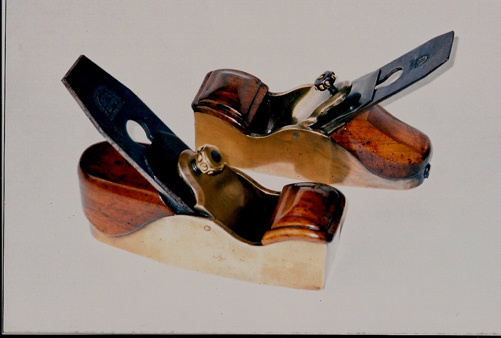